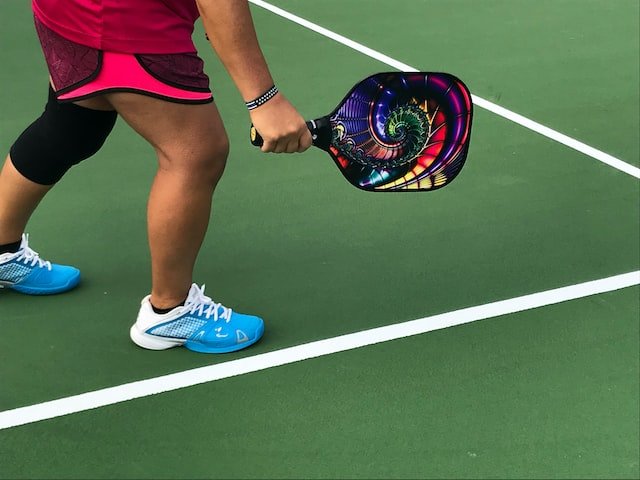 Pickleball is one of the fastest-growing sports in the United States.

New players are flocking to the courts. Some just want to play and have fun. Others want to be competitive.

Luckily, pickleball has had a devoted group of players, learning the finer points of the game – which we can use to improve our game quickly!

Here are 8 easy tips to improve your pickleball game

Don’t fault, just be accurate at first. As you get better, the more you can play around with it. This isn’t tennis, don’t try to be pinpoint accurate – because you can’t be.

Many players tend to think serving in pickleball is similar to serving in tennis; with those laser-beam serves that leave opponents shaking their heads.

Even at the highest level of pickleball, you’re not trying to score a point on the serve.

You’ll be more successful on the court if your focus while serving is simply not trying to fault.

Stop trying to aim down the line or force your opponent to take a specific shot – just get the ball over the net and start the play for the point.

There’s a natural flow to the game.

Trying to go against the flow will put you in some awkward spots.

The flow is very simple in description but more complicated and nuanced in execution.

The flow comes from both teams trying to do two things at the same time:

In truth, that’s most of the game. Every move you make should, in some part, have this in mind.

Let’s look at why both teams want to do this straightforward thing.

It’s essential to look at WHY you do things along with WHAT.

Why we want to get to the net:

Keep this in your mind when you’re on the court playing or practicing. You’ll be surprised how often you do things that don’t serve this concept.

Imagine a Rope Connecting Your Partner and Yourself

If your partner only focuses on their side and you only focus on your side, you two have some problems.

When each player only worries about their side, a huge hole opens up in the middle whenever one of you moves to the side, and the other stays still.

Instead, imagine you’re connected to your partner. As they move to their far side, you move an equal distance to the middle.

Now you have a manageable amount of space on each side, AND you don’t have a big hole good players will hit every time.

Have open communication between your partner and yourself, whether you’re really good friends or just met today.

Communication starts well before the match. Take the time to know what your partner expects so you’re both on the same page.

Most on-court communication is to create clarity. For example, saying “Mine” while going for a ball that may be in the middle will give your partner more time to set up for the return shot.

Mine – when you intend to hit a ball that could be handled by your partner (don’t just say ‘mine’ on every ball).

Yours – when you think they have a better chance to make the shot than you (not just positioning wise, but also what kind of shot is required – a forehand is much easier and more accurate than a backhand, usually)

Out – when a close ball is going to be out of bounds.

When you are calling a ball or a play, it’s happening with enough time for that information to be beneficial to your partner. Hitting a ball, as you call it, “mine” isn’t going to do anything.

Learn From What Beats You

One of the best things anyone can do when playing any game, from poker to pickleball, is learn what beats you. And why.

Odds are, what beats you is also something that beats many players. That’s why they’re doing it.

Whenever you make a habit of learning from your opponents, you’ll never stay stagnant, which is excellent.

This works for opponents you beat, too. Odds are they do a few, or many, things better than you. Learn from that.

Good players learn from everyone.

Here’s the best tip for hitting the perfect shot – make sure you keep it to yourself; it’s that valuable.

That’s right. Don’t even try to hit that perfect shot.

Sometimes when we want to be perfect, we stop ourselves from being good. And you just can’t get to perfection if you don’t get good first.

Accuracy in pickleball is nice. It really is. But too many players think it’s the most essential thing and end up playing worse while trying to hit the perfect shot every time.

No, no. Have a plan. Have an idea of where you want the ball, but instead of aiming for that small hole right on the line (that you’ll probably miss), hit the ball right down the middle of the court.

Send more of your shots right up the middle, and you’ll be surprised how much it just works.

Shot selection is something a lot of players get excited about.

Weaving in a tapestry of different shots, a dink here, a lob there, feels fun.

But unfortunately, for new players especially, this can take away from developing essential skills.

Shot selection only works when you know how to do it, when you can land that perfect shot, again and again.

You probably can’t do this. And that’s fine. By trying to, though, you prevent yourself from building those skills so you can.

So, what shots should you be using?

Most players tend to overuse some of the cooler shots, like a lob, and rely less on simple shots.

Lobs are great because they use deception. But, if you’re using a lot of lobs, that deception is gone and now is just a big meatball your opponent can hammer back at you.

Dinks and dropshots are some of the safest, highest percentage plays you can make. They should be the backbone of your game as you improve.

This idea is a part of our last tip in action…

Pickleball is, basically, a game of just error prevention. When you can make more high percentage plays than your opponent, you win.

This isn’t very attractive to most players. But once you adopt this concept into your game, you’ll see all the cool, sexy plays you’ll be able to make.

These tips are practical because they force you to develop a solid foundation.

Solid play wins. It’s not until we reach the game’s highest echelon that fancier, more dynamic plays start to shine and are necessary.

And that’s because their foundation of the game is basically perfect.

Hopefully, you can take these 8 tips to the court and start seeing real improvement right away.