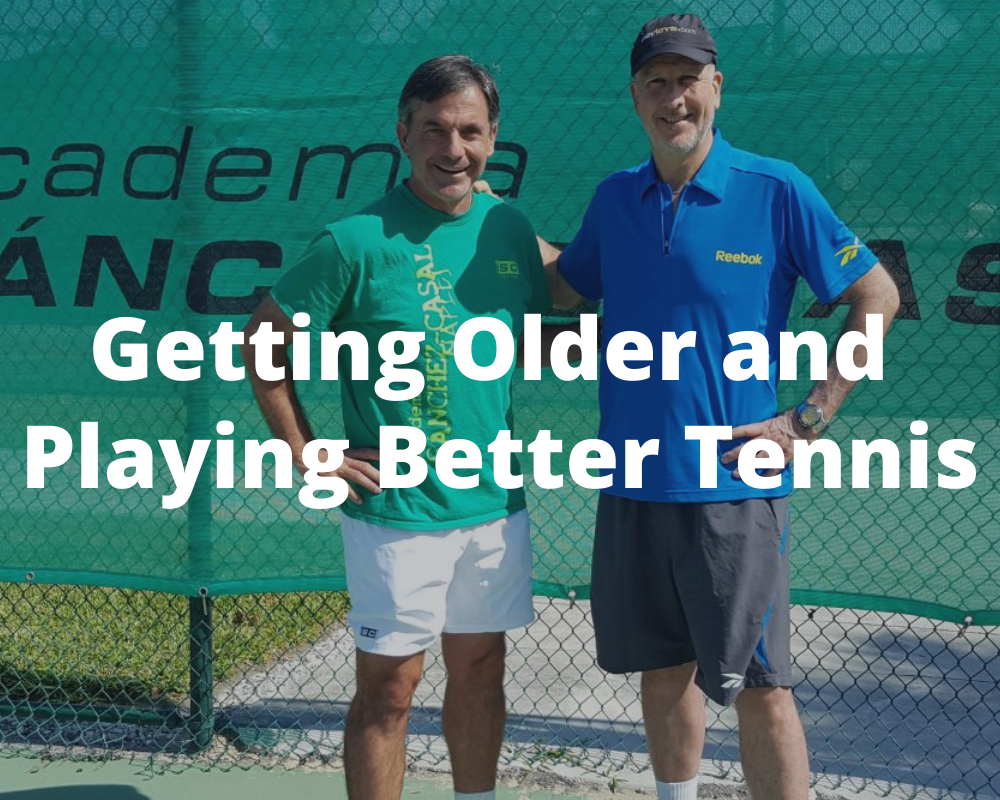 For tennis the generally true saying, “The older you get, the better you used to be” can be overcome with some savvy game adjustments. Yes, your best memories can be ahead of you!

Tennis legend Billie Jean King once said at a coach’s convention, “As I get older, my half volley keeps getting better and better!” She was already past 50 when she made that remark. If you haven’t figured out how this is possible, the point she was making is that she cannot quickly run forwards anymore to serve-and-volley and ends up digging out a lot of low balls from behind the service line.

As for me, I will turn 68 this year. But, really, I feel like 50 … in most ways. Well, at least people tell me I look younger than 68! Unfortunately, the truth is that my muscle strength, vertical jump, flexibility, stamina, speed, and other things I don’t want to list are more like a semi-athletic 68-year-old. 50? I guess not.

The purpose of this article is to share tips and pointers on how to play better in our senior years and not worse. Yes, it’s possible.

STRETCH – Most of us are lazy about stretching. It’s unfortunate, but true. But, think about this. The main reason that senior players stop playing tennis is due to injury, AND most injuries can be avoided or minimized by proper stretching! Plus, remember to not only stretch the large muscle groups, but also your hands and feet. If uncertain about how and what to stretch, Google is your friend. There are many free and very user-friendly stretching resources on the internet.

LEARN THE FLEX – As we get older, the standard ready hop or split step may no longer be possible. After all, if you hit 150 balls in an average singles match, you will be performing 150 or more miniature vertical jumps that your teaching pro calls a ready hop or split step. A less joint-stressful alternative is to “flex” and then “unweight” like snow skiers do before each time they turn their skis. How far to flex the knees? A good guideline is to flex until you can’t see your shoe laces if you look down. Flex instead of split and chances are your feet and knees will feel a lot better after your next match.

PRACTICE IN NO MAN’S LAND – At the beginning of this article, we referred to Tennis legend Billie Jean King once saying, “As I get older, my half volley keeps getting better and better!” The point she was making is that, as she gets older, she cannot quickly run forwards anymore to serve-and-volley and ends up digging out a lot of low balls from behind the service line. The take home tip from this fact of tennis aging is to actually practice standing in between the service line and the baseline. Yes, camp out there. Get used to the range, angles, and options of volleying, hitting groundstrokes, and even half volleys from this part of the court.

DROPS, DINKS, AND ANGLES – They call it “old man tennis” but the truth is that learning how to use drops, dinks, and angles (aka touch shots) is simply better AND smarter tennis as we get older. Almost all of these touch shots are hit with backspin or underspin and, as you will see in the next tip, hitting backspin requires less effort than topspin. As we get older, less effort generally results in smarter tennis!

BACKSPIN IS BETTER SPIN – There are two concepts to understand here. First, that the ball speed of every single incoming ball that bounces will slow down by about 50%. This means that incoming balls that bounce need more energy from the hitter to return, as compared to volleying balls out of the air. The second concept is that changing the rotation of the incoming ball requires more energy than keeping the direction of rotation the same. In real play this means that since all bouncing incoming balls, whether your opponent hit them with topspin or backspin will end up with forwards or topspin. Returning that topspin with topspin requires you to change the direction of the ball’s rotation and therefore takes much more energy than returning topspin with backspin. This is why many of the top senior players chip or slice a significantly higher percentage of their groundstrokes compared to their younger counterparts on the professional tennis tour.

SERVE LIKE A YOUNG NADAL – Rafael Nadal’s serve is better now, right? If you just look at his serve and not how it may have changed part of his entire approach to the game, you are correct. If, however, you look at the evolution of his serve hand-in-hand with the rest of his game, there is a possibility for disagreement. In his early years, Nadal was the consummate grinder and his ¾ speed spinning serve was part of the way his points started. Few aces. No double faults. It just started the point, right? Wrong! Part of the effectiveness of Nadal’s serve was that it was part of his process of wearing down his opponent. After all, the only threat he faced on the tour was an explosive player who could hit dozens of winners, yet keep their unforced errors to a minimum. But, if a player is being physically and mentally worn down against the most dynamic grinder in the history of tennis, it is next to impossible to play a consistently explosive game full of winners. Nadal’s serve is now better, but his efforts to shorten points are resulting in more errors than before. The “Take Home Tip” for you is that a solid spin first serve is often better than a powerful blaster that only goes in 30-40% of the time. You don’t have to be a grinder to wear your opponents down. Just do some things well to make them move and hit more balls than they are accustomed to.

OLDER PLAYERS POACH LESS – As we get older, most of us get slower. But, while a quick explosive move to poach may no longer be possible, there are at least three things you can do at the net to help your serving partner hold his or her serve. First, have the server communicate if they are going to serve wide. Then you can be prepared to cover for the possible return down your alley. Second, cover the middle as much as possible. Taking one step towards the middle of the court to pick off some of those returns is still possible. What is much more difficult is quickly returning to your original position. Since it is doubtful your partner will be serving and volleying in senior tennis, communicate and have the server be alert to cover behind you in case you don’t put the volley away. And, third, be sure to fake the poach. Faking to poach with a little body and head “English” can elicit unforced errors from even the best of opponents, At least two times in every game, fake a poach and watch your opponent hold serve more often than ever.

RELAX YOUR GRIP – Grip tension is one of the biggest enemies of recreational players. The tighter we grip the racquet, the more prone we are to injuries AND we will also be swinging slower than our potential and therefore hitting softer serves and groundstrokes. There are two easy ways to see if someone grips too tight. First, it is the single biggest cause of tennis elbow. So, if you are wearing a tennis elbow armband, there is a good chance you are holding the racquet too tightly. And, second, do a little “tennis palm reading.” If you have more than a few small yet noticeable calluses on your palm, there is a very good likelihood you are gripping too tight. Of course, it will be hard to relax the grip as much as the pros and still control the ball, so try and relax a little bit more each and every time you get on the court. Who knows? In 6 months you may find your calluses have completely disappeared and that you are playing better tennis!

HAVE FUN – We need to finish this article with the most important tennis vocabulary word of them all. F-U-N. Sometimes we get so caught up in the competitive side of tennis, that we can forget to stop and smell the roses. If you can remember this final tip, your tennis life will be happier and you will probably play better at the same time: Remember to smile and breathe (exhale) as you strike every shot. This practice will also help you relax and swing with more fluidity. A win-win all the way.