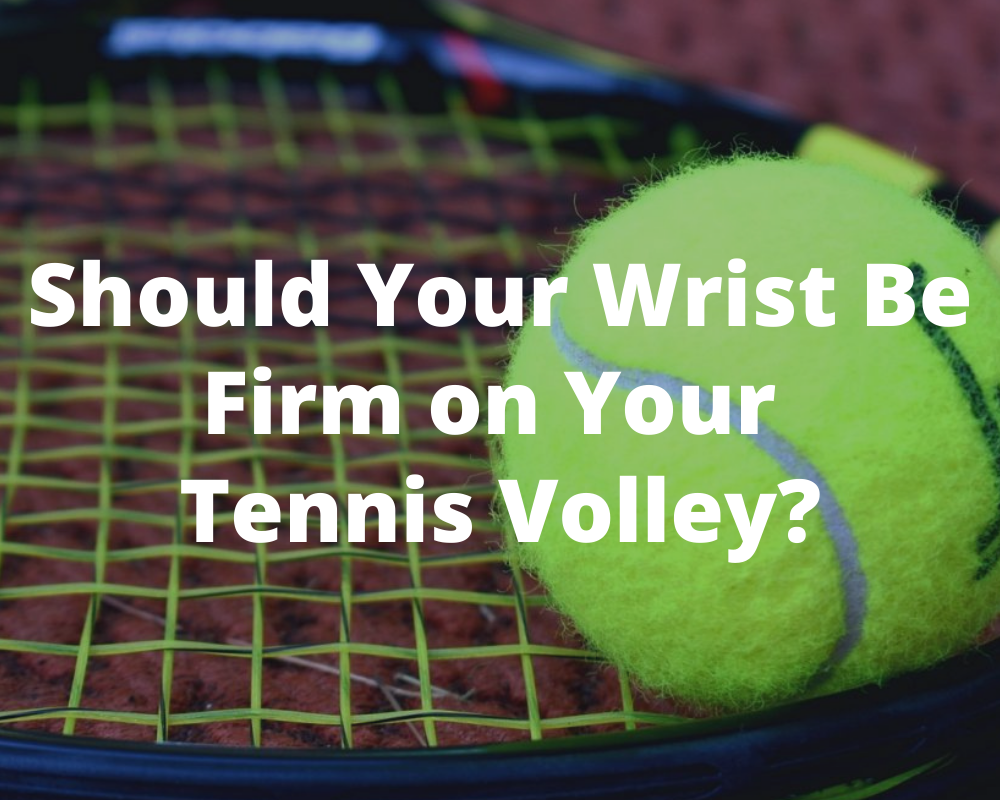 This article will challenge the traditional and popular instruction to lock your wrist when you volley. Since the opposite of locked or firm is loose, I want to be clear that neither fully locked nor fully loose will work well for the volley. First, let’s break down the volley into two components: the backswing and the forwards swing. We will organize this blog with a series of questions and answers.

When we are at the net, two factors make things fast and exciting. First, we are closer to our opponent and therefore have about half the time to react to the incoming ball. Second, the ball hasn’t bounced and slowed down. Therefore, the ball itself is coming at about twice the normal groundstroke speed.

Q: Should the wrist be firm on the volley backswing?

A: No, it needs to be relaxed in order to prepare as quickly as possible.

Q: How big a backswing do you need?

The understood and accepted instruction to never take a backswing to volley is outdated and incorrect. But, before you fall into a panic, here’s why.

A: It all depends on the speed of the incoming ball.

When the incoming ball is fast, little or no backswing is needed or helpful. And, it should be noted that, on the forehand volley, the hand and wrist lay back a little in the preparation phase of the shot. However, when the incoming ball is slow, you will need to take your racquet back further to allow yourself to generate the racquet speed and subsequent ball speed to put those slow sitters away.

The forwards swing on the volley is just as it sounds. It includes all forwards racquet movement from the furthest back position in the backswing until the finish of the shot. The key question we are trying to address in this part of the article is whether the wrist should be firm or relatively loose during the forwards part of the swing. As you will see, the answer is that it depends on the speed of the incoming ball.

Q: On fast incoming balls, do you want a loose or firm wrist?

A: Use a relatively firm wrist on fast incoming balls.

There are two reasons to have a firm wrist (along with a very compact, short forwards swing) when volleying a hard hit incoming ball. Think of the incoming ball striking your racquet as a ball hitting a backboard.  When a hard hit ball strikes a backboard or any wall, it will rebound quickly because the wall absorbs little ball speed and the ball’s energy (and speed) stays with the ball.

On the other hand, if you hit a fast ball against a foam mattress, the ball will rebound but much more slowly since the foam absorbs the ball’s speed. How does this relate to the wrist on the volley? It’s quite simple.

A firm wrist creates a “firm” racquet head and acts like a backboard. A loose wrist creates a “soft” racquet head, much like the foam mattress. This explains why, against fast incoming balls, you want a firm wrist to hit firm volleys. Conversely, if you are trying to hit a soft drop volley, then you would want a relatively loose wrist that softens the racquet to absorb the ball speed and the rebound velocity.

Q: On slow incoming balls, do you want a loose or firm wrist?

A: Use a relatively relaxed wrist on fast incoming balls.

This is simply a common sense issue. If the ball is slow and you are hitting it out of the air, chances are you are standing either around the service line or in the service boxes. Generally speaking, if you don’t generate pace and finish the point on that single shot, you will lose the point. Why? Although being in the front half of the court and volleying is a very offensive position, it also puts you in a very vulnerable position as well. Give most opponents a chance to set up against a volleyer and they will be able to frequently hit a passing shot or effective lob. In short, how effectively you take that slow sitter and volley will quickly determine the outcome of the point.

Q: On slow incoming balls, how relaxed should the wrist be and does it ever firm up?

A: The loose wrist helps the racquet head accelerate, but you do want to firm up just before contact.

This is another common sense issue. The firming up of the wrist to one extent or another (accomplished by squeezing the grip) is important for ball control, regardless of whether the incoming ball is fast or slow. After all, directional control on volleys is just as important as how hard the ball is hit. That said, squeezing the grip and firming up the wrist too early is not helpful. Doing this will dramatically slow down the racquet head. The best general advice would be to squeeze the grip and firm up the wrist just prior to contact.

Times change and, unfortunately, all too often education doesn’t adequately keep up with that change. Tennis is no different. One of the major changes in tennis in recent past decades has been the transition to lighter racquets and faster racquet head speeds. Yes, changes in racquet technology have factually changed many parts of tennis, with many issues moving from the court to the history books. The emphasis on locking your wrist to volley is just one of them.