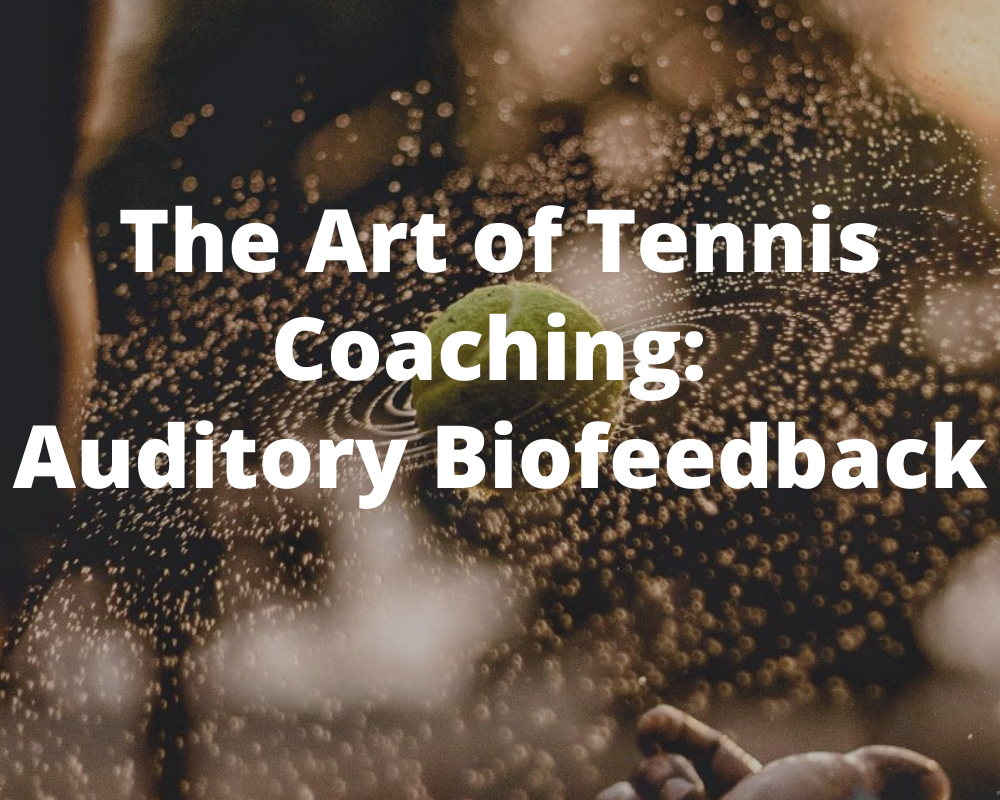 Sound is all around us. We learn from sounds from the day we were born. Sounds also trigger us to take action. Just a few examples are alarm clocks, police sirens, and beeping microwaves. Therefore, it only makes sense to incorporate sounds into tennis training to trigger learning and improvement.

In this installment of “The Art of Coaching” series we will share tips on using sounds to get your game into the fast lane of better tennis.

Like all practice concepts, we advise performing each exercise five to ten times using a chosen verbal trigger until you can comfortably reproduce the same quality shot or movement on your own.

Concept: Every piece of music has its own rhythm. Tennis is the same with one important distinction: The rhythm of a tennis rally is almost constantly changing! In other words, the time between one player hitting the ball and the other player contacting that same ball will usually be different. Perhaps only if you have two steady baseliners who hit balls at similar speeds will players experience a steady baseline rhythm. In order to be successful in competition tennis players definitely need to cope with the changing rhythm of various opponents and styles of play.

Drill: Rally from baseline to baseline with a partner. Call out “hit” when you contact the ball and call out “and” when the ball is halfway between the hit and the bounce. Then call out “bounce” when the ball bounces followed by “and” between the bounce and the hit. Each rally will sound like “hit and bounce and hit and bounce and hit.” If you’ve ever played a musical instrument, you’ll recognize that it is the same as counting out eighth notes in a measure with a 4/4 time signature. Your hit is the first beat of the measure. Your shot bouncing is the second beat, your opponent striking the ball is the third beat and the bounce of your opponent’s shot is the fourth. Then, when you strike the ball again, it is the first beat of the next measure.

Concept: As exciting as speed is, it can make us nervous all the same. Yet while it may take practice to get used to swinging fast, the benefits are tremendous. In fact, faster swing speed not only generates a faster shot, it can also lead to more control, not less. Yes, as surprising as it may sound, a faster swing produces control as a willing companion.

Concept: Solid contact is the essence of successful play at all levels. However, most tennis players find it easier to make solid contact with one groundstroke over the other. The result is often a weak backhand or a weak forehand that is exploited by opponents on critical points. To develop solid contact on both groundstrokes, you have to feel it as well as hear it.

Drill: For this drill you will need a large bath towel and a partner to hold the towel off to one side (picture a bull fighter holding a cape). Swing at the towel with a full swing, trying to produce a loud spanking noise by hitting the towel with the strings of your racquet rather than the end of the frame. Practice this exercise until you can alternate between forehand and backhand groundstrokes with a consistent feel of solid sound of contact on both sides. WARNING: Before swinging at full speed, try a few slow motion strokes to eliminate any chance of hitting the player holding the towel. And, if you’re the person holding the towel, be sure the person with the racquet is a friend you can trust.

Concept: Movement and positioning are the name of the game in tennis. Yet getting to the ball is just the start. Precise positioning is essential as well. To get to the right place on time and on balance, adjusting steps are needed. On hard courts, you should be able to hear your sneakers squeak.

Drill: If you are a parent or tennis coach working with a group of young children, initiate a fun contest. See who can make their sneakers squeak the loudest. Then, extend this friendly competition beyond just squeaky noises; have the children pose for a photo and smile after hitting the ball. This will insure that they are on balance and happy. If you like, score points for squeaky sneakers, balance, and the biggest smile.

Tip #5: Use a Whistle to Test Recovery and Readiness

Concept: Tennis is full of what I call “one shot wonders.” These are the players who hit one great shot and stand to admire it. Unfortunately, when the ball they just hit comes back over the net, they are not ready. Yes, recovery and readiness are keys to better tennis.

Drill: You will need a tennis coach or friend with a whistle for this drill. Two players rally from the baseline. The coach may be one of the hitters or just stand on the sideline. Blow the whistle when the partner (or the coach) hits the ball. As soon as you hear the whistle, freeze in your tracks. If you are positioned properly and on balance, ready to move to the next ball, you did well. If you are way out of position and not ready, chances are you were playing like a “one shot wonder.”

Check out the next article in this blog series right here “The Art of Tennis Coaching: Visual Learning“