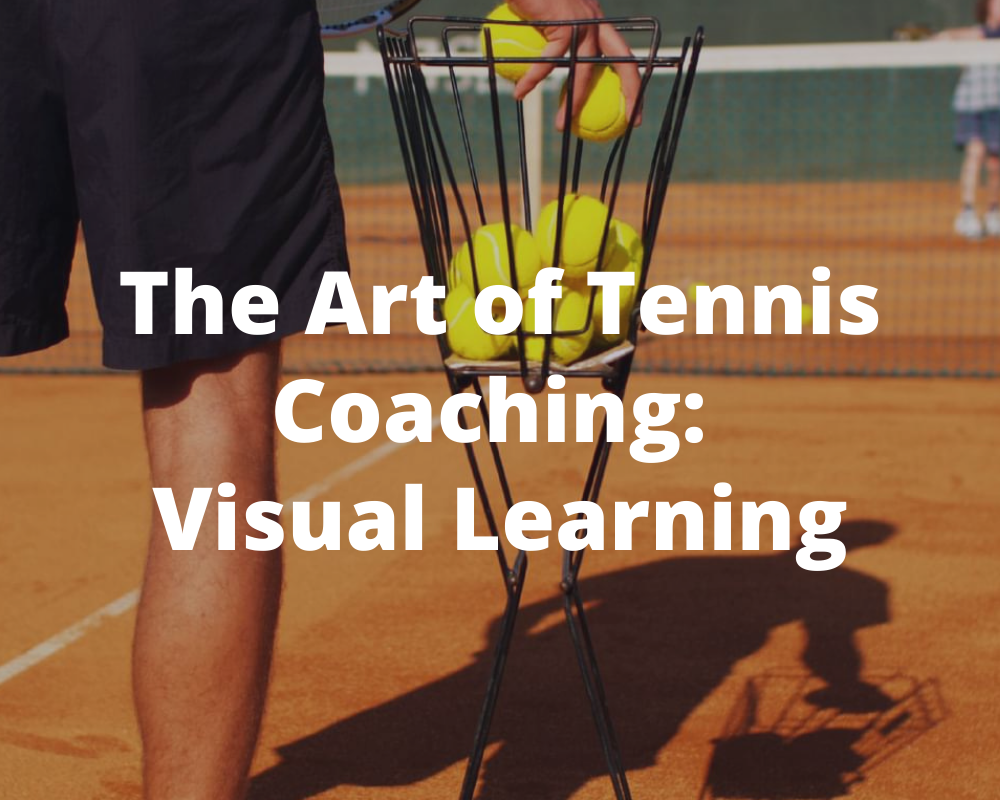 What we see guides our movement and behavior thousands of times every single day. Whether they be lane dividers on a highway, crosswalks at an intersection, a welcome mat to clean our shoes, or the refrigerator handles that tell us where to grab and pull to open, it’s the same concept. A series of visual cues direct our actions all the time.

The purpose of this article is to establish how we can improve our tennis by tapping into the visual cues that are all around us. Some of the following examples will help to correct specific problems such as tossing behind you on a serve, while others will help overall issues such as hitting fewer balls in the net.

Like all practice concepts, we advise performing each exercise for just part of a practice session. Then, once you can comfortably execute the shot you are practicing, try to reproduce the same quality shot without the visual aid in place.

How to practice it: Raise the height of a net by weaving two 6-foot poles through the existing net. Then, from pole to pole, raise the height of the net by stringing a rope or bungee or use something like a lightweight volleyball or badminton net. Start with a raised height of about three feet above the existing net and adjust lower or higher depending on the amount arc and spin you want to practice. Simply rally with a partner or with a ball machine. After ten or fifteen minutes of practice, hit without the raised net in place. By that time, you should still be able to see in your “mind’s eye” the raised net you just hit over.

The concept: Everyone knows that aiming at targets is helpful. But, what most tennis players don’t know is that aiming at bull’s-eye targets like single cones can be counter-productive. If you’ve ever tried to hit a small target like a single cone or a few tennis balls grouped together, you understand. If a target is too small to hit regularly, you won’t feel good about your practice. And, if you’re not confident about your ability to hit to a specific area of the court, you can’t play your best.

How to practice it: Use lines, ropes, groups of cones, or whatever you can get your hands on to create target areas instead of a small bull’s-eye target. How large should the area be? Make it big enough so that you can successfully hit into the target area about 70% of the time. Then, as your aim improves, gradually make the target area smaller and smaller. Like Tip #1, be sure to take away the visual guide after some time. Then, close your eyes looking in the same direction where you were just aiming. If you continue to see your target area and can practice with equal success without the target in place, you have improved your visualization ability and your tennis!

Tip #3: Toss under a fence gate

The concept: An unruly service toss has unraveled many a great tennis player, what to speak of the tens of thousands of us who never make it to the U.S. Open. One of the most common problems is when servers toss the ball too far behind themselves.

How to practice it: Stand under a fence gate with the fence open. Place your front foot directly under the opening. Then toss the ball as if you are tossing to serve. The goal is for the tossed ball to travel straight up and not hit the fence above the gate, but rather to go up and straight back down to be caught in your outstretched tossing hand. When you can perform this exercise five times in a row with success, go back on the court and visualize the same gate opening, but this time actually serve the ball. Keep going back and forth between the gate toss and the actual serving until your toss is equally accurate for both.

Tip #4: Serve to the back fence

The concept: The geometry of serving angles is interesting. A tennis player would have to be over 6 feet 2 inches tall with arm fully outstretched to even have a chance to actually serve a ball straight downward into the service box. And, even with that height, the server would clear the net at its lowest point and just barely hit the service line with the ball. In other words, the vast majority of us have to hit the ball upwards off the strings and, only then, with the assistance of gravity and the friction created by spin, will the ball land in the box. With this in mind, hitting upwards with force is one of the primary sources of power on the serve. Strengthening this upward motion to improve your serve can be practiced by aiming at the back fence about one hundred feet away.

How to practice it: After seeing and aiming at the back fence about ten times, visualize the acceleration you need to hit it, but change just one mechanical aspect of your serve. Snap your wrist downward just enough to hit the ball into the service box. The challenge will be to keep visualizing the energy required to hit the opposite back fence and maintain that same racquet speed and power. The result should be a serve with increased speed, so be forewarned!

Tip #5: Swing in front of a mirror

The concept: Shadow swinging has long been proven to help with stroke development, since it allows tennis players to repeat proper technique over and over again without the stress of having to hit the ball, what to speak of the additional pressure of competition. Shadow swinging in and of itself is helpful, but it helps even more if you can actually watch yourself while swinging.

How to practice it: Find any reflective surface, whether it be a mirror or a large glass window or door. Just be sure not to hit anything breakable if you are shadow swinging inside your home. One thing to remember is that while acquiring a strong visual reference takes practice, don’t overdo it and be patient. Practice in short “mini-workouts, maybe swinging a few dozen times at most. Then get right out on the court and put your new skills to a test. As needed, keep repeating until it is completely natural and automatic.

Check out the next article in this blog series right here “The Art of Tennis Coaching: Positive Reinforcement“