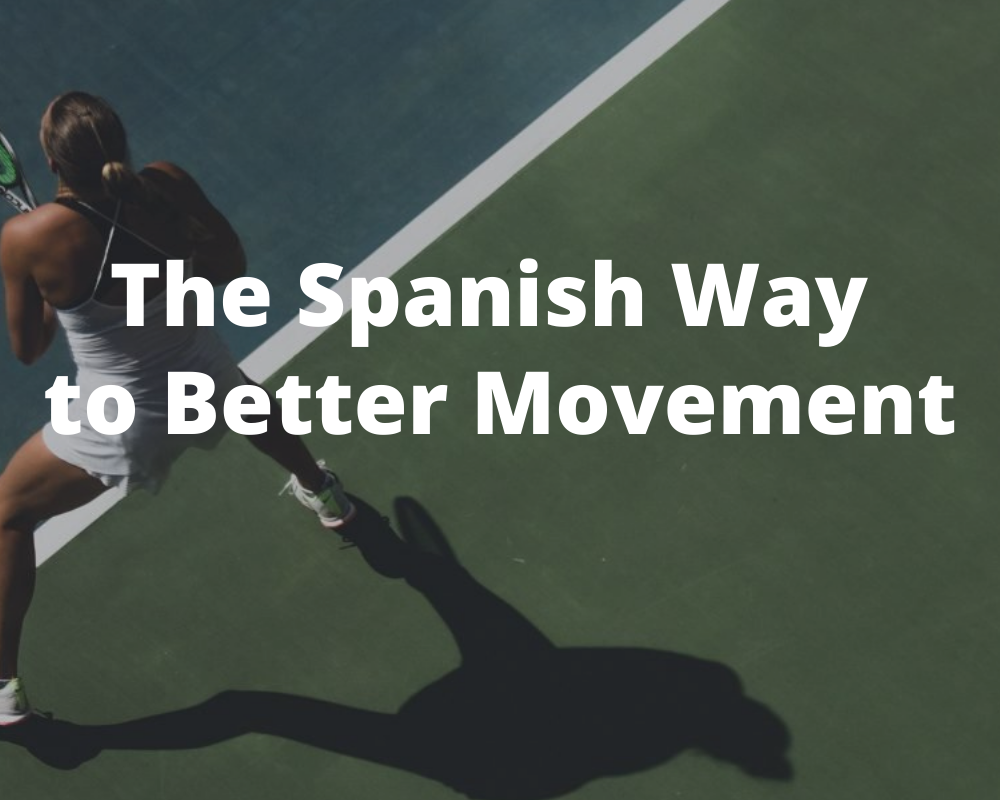 Movement is the key to modern tennis.

If you were to look at any competitive tennis player, you’ll see their whole game is based around fast and compact movement.

It’s more than just getting to the ball.

It’s getting to a spot so you can attack the ball in a manner that gives you the highest chance for success.

Because a lot of Spanish players began adopting this style (and everyone else followed suit quickly thereafter), it’s often called the Spanish Way or Spanish Method of tennis movement.

If you’re a player wanting to get to the next level, a parent that wants to support your tennis-loving child, or a coach looking to challenge your students, you simply must check out the Spanish way of tennis movement.

One, a player runs horizontally to catch up to a ball and hits it back over the net.

The other, a player is already behind the ball and is able to step into their shot.

Which of these two is a better shot?

Obviously, the second one.

The Spanish way of movement is all about getting behind shots more often so you can hammer home stronger shots.

That’s the why it works. We’ll get to the how it works, which is footwork, in a moment.

There’s another reason we don’t want to hit a shot when we’re running horizontally to the ball besides hitting a weak shot.

If we’re running east to west when we hit the ball back, our opponent will have an easy time putting the ball someplace we simply cannot reach, crosscourt.

But when we’re centered over the ball, we won’t be losing our position and we’ll be ready for the next shot.

As you can tell, the Spanish way of tennis movement is ALL about footwork.

It is core to this style of tennis.

In fact, it’s probably better said that footwork is the Spanish way.

Footwork gives you the time to be in position, the space to move around the ball, and the power to hit those winning shots.

But how do we improve our footwork?

There is only one way to improve your natural footwork skills.

And this is with drills.

Not just any drill, mind you. You want to be very intentional with drills specifically designed to work on footwork.

Luckily, one drill closely embodies the whole of the Spanish way.

It’s called it the X marks the spot drill.

In the drill, you set up at the center mark of the baseline and have someone give you a soft serve or toss.

Remember, the focus is footwork here, not hammering back shots right now.

The idea of the drill, thus the name, is to make an X like movement. You go down one of the legs of the X to hit the ball and then come back to the center of the X where you wait for the next shot.

Use tight shuffles and hip rotations to get behind the ball and give a good shot before returning to the center.

Then go to the opposite side and repeat.

This only covers the bottom half of the X, though.

So, after a few reps, start to use the top half just like you did the bottom.

Check out this great video to see the drill in action.

If you want to get real serious about the drill, make sure you check out this training aid that will make this drill approachable for players of most ages and skill levels.

Developing the Spanish way of better movement unlocks a plethora of new opportunities for you and your students.

There is a reason this style has become commonplace and you’ll never regret making it a part of your repertoire.