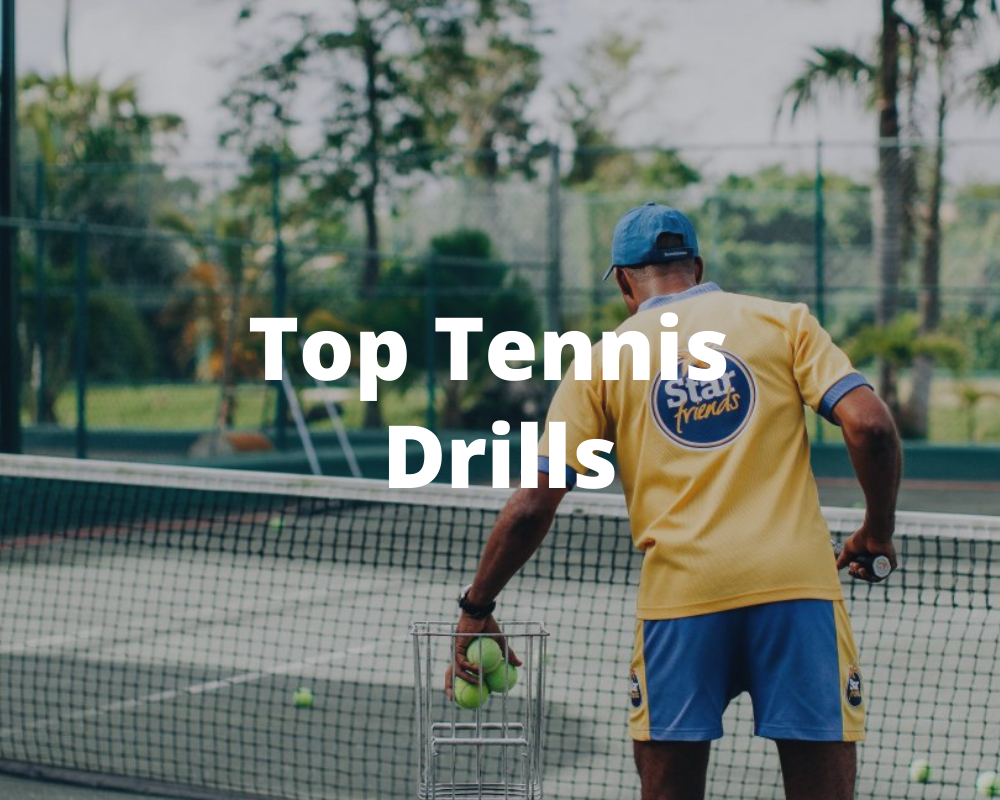 This article is a compendium of what all tennis coaches are looking for:  New and creative drills!

They are derived from literally hundreds of exercises which have been presented in workshops across the United States over the past couple of years.  The criteria for a drill being selected for this article was simple:  It had to be extremely simple and uncomplicated.  Personally, I’ve always had trouble reading the drill pages in magazines with all of those X’s, Y’s, and arrows.  Think about it.  The best drills have unique and innovative concepts which can be conveyed quickly and easily to students without cumbersome rules.  They need to be so much fun and so simple that students can use them on their own with their friends.

One of the most satisfying experiences for a tennis coach is to run a drill for some students and then to see those same students practicing that same drill or game on their own later on. These 9 tennis drills are designed to do just that.

The first sample of upcoming on-court action comes from Greg Patton, well-respected NCAA coach from Boise State who I was able to see conduct three presentations in 1996 alone; in Newport Beach, California; Santa Rosa, California; and in Park City, Utah.  Among the many drills from Greg, the one we’ll reveal now creates tremendous focus on winning the last point of each game.  Here it is.

Either singles or doubles are played and when one side reaches game point and doesn’t win that point they go back to zero.  For example, in a singles practice match if you are serving at 40/15 and lose that game point the score would then become love/30.  What a simple yet fantastic way to simulate match pressure.

Stay Out of the River

I like to call this next exercise “Stay Out of the River” and although incredibly simple, it is a powerful skill-builder and a lot of fun.  I first saw it at a tennis teacher’s conference in Munich, Germany.

The player has three dome cones and pretends they are stones in the river.  The goal is to move from one side of the court to the other without getting wet, that is touching the court surface with either hands or feet.  I even tried this far away from a normal tennis setting recently and three 10-year-old girls stayed focused with this one exercise for a full hour!

Back to the Basics

This next concept comes from interviews with two players from Sweden:  Magnus Lundgren who now lives in Munich, Germany, and Ville Jansson, who lives in The Woodlands, Texas.

We all know that the one thing we’ve heard a million times from some of the most respected and experienced coaches in the world, it’s to stress the basics of tennis over and over again.  An example is that mini-tennis is frequently viewed as an exercise conceived only for beginners.

However, anyone who’s seen the Swedish Davis Cup Team warming up has always seen players like Stefan Edberg drilling mini-tennis and exercises similar to mini-tennis for an hour or more in their warm-ups.  In fact, even before using racquets at the beginning of practice, both Magnus and Ville explained to me how the Swedes will even play mini-tennis with their hands and feet – no racquets!

Now let’s move to an old favorite of mine that was recently renamed by Greg Patton as the cross-eyed drill.

With four players on a court, have players on one side of the net bounce and hit two balls crosscourt simultaneously.  After that, anything goes.  Quickly one of the two balls is missed and the point continues until the last ball is hit out or in the net.  This is a great drill to increase ball awareness, teamwork, and reflexes.  At the same time this two-ball drill extends the length of points allowing for less experienced players to hit more balls in a doubles situation.

This exercise dramatically develops both focus and concentration while helping players gain a strong sense of momentum.

Simply have two or four players playing points.  Games track both mini and maxi points.  A mini point is awarded for each point played, and a maxi point is awarded when one side wins three mini points in a row.  The momentum in this drill rapid shifts from player to player, and games to five major points can easily take 15-20 minutes.

A great variation for slightly mismatched players is to require the stronger player to win more mini points in a row to receive a maxi point.  This will quickly level the playing field to challenge both sides.

Another interesting, yet incredibly simple exercise is to put both regular balls and different colored balls on a court and play either singles or doubles.

When I used this with my students, someone inevitably tried to manipulate the rules.  They called out three points before their first serve, proceeded to miss their first serve, and then tried to change the point to a value of only one point before their second serve. The benefits of this drill include tremendous increases in focus, competitiveness, simulation of match pressure, and most importantly, fun!

Now let’s share a little off-court tidbit from an interview with Rodney Harmon, tennis coach at the University of Miami, and former top 25 world-ranked player.

We were talking about the importance of coiling and linkage for generating more power on groundstrokes and the serve.  Rodney shared with me how he demonstrates this with his college players to get them to quickly see the benefits of coiling and bending to generate more swing length and racquet head speed.

He simply takes a rubber band and bends it around two or three fingers like we used to do when as children we would shoot rubber bands across a room.  The longer the rubber band is stretched, the more power is built up which, when released, results in a forceful projectile flying across the room.  When he shows this to his players and jokingly aims the coiled rubber band at them, they quickly see the benefits of increased rotation through coiling and work on it more enthusiastically themselves.

This next exercise comes from USPTR member Barbara Maitland of Massachusetts.

All too often players think they have to go to the gym to work out.  And, many people conclude that they don’t have the time to both play tennis and work out in a gym.  The result?  Many of them quit playing tennis. With the Hip Hopper tennis ball pouches our players are starting with ten balls each.  They are competing side by side to see which team can keep their balls in play longer.  Each team has 20 balls to use up and the points can last 15-20 minutes.  As compared to normal tennis when the ball can be in play as little as 15 minutes out of every hour, this exercise is incredible.

What a work-out combined with the fun of playing tennis!  In fact, what about the idea of  promoting “Aerobic Tennis” as part of the clinics and events at your club or facility.  It’s a lot of fun as well as a great conditioning opportunity for players of all levels and ages!

To finish this article off, let’s share an exercise from the 1996 USTA National Tennis Teacher’s Conference by former world No. 1, Stan Smith.

Stan had his players call out numbers from one to five representing the degrees of aggressive play that they plan to execute.  For example, have players call out number five if they plan to hit an outright winner.  Number one would mean they will just keep the ball in play.  It also gives them instant feedback about when to hit an attacking shot.  For example, if a player calls out number five and repeatedly misses the shot, then it becomes immediately clear that they should not play a number five on that particular type of ball.  Therefore, improved shot selection as well as the ability to decisively pre-plan are the immediate benefits of this exercise.

I tried experimenting with this exercise with my recreational level students, and although Stan recommended a one to five scale, when I simplified it to a one to three scale, my students really got excited!